How Bambi, the female Banksy, became the new star of street art

From Kanye West to Brad Pitt, the A list are queuing to buy work by the Londoner who’s determined to stay anonymous• Bambi street art – in pictures 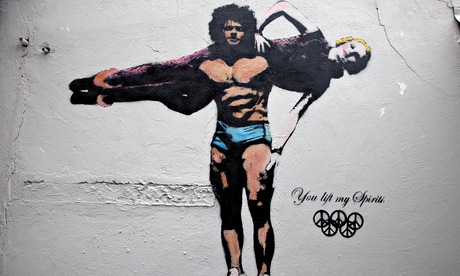 You lift my spirits, a graffito by Bambi made for the London 2012 Olympics. Photograph: Jeff Blackler/REX
She has spent years dodging the police in north London, armed with her spray cans and stencils, but this summer Britain’s leading female street artist, known as Bambi, has been propelled into a world of wealth and glamour. When rapper Kanye West presented the artist’s semi-nude portrait of his bride, Kim Kardashian, as a wedding gift, it was the crowning moment for the artist. Just who is Bambi? The graffiti star was dubbed “the female Banksy” when she gained more widespread public attention in 2011 with the appearance of her striking image of the late Amy Winehouse on a Camden Town doorway. Like her male counterpart, she keeps her identity secret. And now, just like the renowned Bristol artist, her work costs tens of thousands of pounds: where once she simply paid tribute to the style of celebrities such as Winehouse, David Beckham and Kate Moss, today she is commissioned by international A-list entertainers, including Rihanna, Robbie Williams, Angelina Jolie and Brad Pitt. Famous names are queueing up to buy her work. Bambi’s restored painting of Winehouse, once painted over by the local council, now lies reverently protected under Perspex. American actress Michelle Rodriguez, star of Lost, commissioned a Bambi portrait of her then girlfriend, supermodel Cara Delevingne, and Pitt is thought to have paid £60,000 for Bambi’s wedding portrait of the Duke and Duchess of Cambridge, featuring the slogan “A bit like Marmite”, before commissioning further portraits of his own family. Robbie Williams bought Bambi’s image of a baby before his child was born in 2012, while his former Take That colleague Mark Owen spent £20,000 on one of the artist’s works for his 40th birthday. Singer Adele and Harry Styles, of One Direction, are also believed to own pieces by Bambi. This weekend Michael Sakhai, director of London’s Walton Fine Arts and sole agent for Bambi originals, said that, while the artist was at the centre at a whirlwind of publicity, she was determined to keep her anonymity. “She has become a real phenomenon and she has been talked about all over the world, but she wants to stay hidden,” he said. An exhibition at Sakhai’s gallery, called When Banksy Met Bambi, displayed works by the two artists alongside each other for the first time and followed a stint of working in New York together. Both started out as outsiders intending to undermine the sleek world of the modern art market. “There seemed to me to be a big divide between the dirty, organic, smelly process of art making and those sterile spaces in which art was being shown,” Bambi said last month. She added that her secret identity remains important: “The main reason is for security and the other is creative freedom.” Many other street artists, including the increasingly sought-after Plastic Jesus, who shares a gallery with Bambi, have hidden identities. The fake names or “tags” were originally designed to protect them from the law, since defacing property is a criminal offence. Artistic cachet undoubtedly comes with such secrecy as well. Although she lacks the pointed wit of Banksy, Bambi’s images are not all bland homages. Her 2010 Hero to Zero stencil “burner”, or graffiti masterpiece, shows an aggressive-looking man with a dog on a chain and represents an ex-British soldier who has become mentally unstable on return from Afghanistan. She also created an image of Pope Benedict XVI giving a two-fingered salute labelled Rude Pope. She told a local paper last year that she was in her 30s (although this weekend her gallery suggested she may be older) and she claims to have been arrested in Islington in her youth for attempting to paint a wall. “I like to entertain and amuse people with my art. I know what I do is illegal,” she said. “It’s criminal damage, and I can get very nervous when I’m out working, often in the early hours. The trouble is I have never been able to resist a blank wall.” But dealer and gallery owner Paul Jones, who has represented street artists for 30 years, suspects the last juices have been wrung from an art movement that started in America, before coming to Britain in 2000, where it was re-invented as a print buyers’ market. “Nowadays young people buy a piece of so-called urban art instead of going to Conran to get a fruit bowl,” said Jones, who runs Elm Lesters Painting Rooms. “What is coming through now is a re-hash. I believe any art movement can really only last a decade. I was one of the first people to take street art seriously here and bring it into my gallery. Banksy used to come here to see it. But now it is all a bit of a gag or a game.” Critics are also asking what Bambi’s high prices and popularity mean for the future of street art. Is the British boom ending in a glut of glittering fashionability? Street art, born out of urban alienation, seems to have become a desirable decor feature for those with money and status. In response, Jones has dropped all other artists to back Adam Neate, who began as a street artist and has developed an international following. “He is the best I have come across,” said Jones, who presents a show of Neate’s newest 3D work on 5 September at his gallery. Neate, from Ipswich, started out by leaving cardboard artworks around the city and now creates portraits using clashing materials, a technique he calls Dimensionalism. His work now sells for tens of thousands of pounds. While there are artists like Neate, attempting to innovate, rather than to just “bite” (or imitate) existing graffiti or urban art, then the movement still has a point, Jones argues.

Nick Walker Introduced stencil graffiti to Bristol in the 1980s. Adapted to combine freehand drawing and has a bowler-hatted alter ego, The Vandal.

Plastic Jesus A rising star who makes large installations, such as I Want to be a Celebrity.

King Robbo, the late, admired rival to Banksy who feuded with him for a year via painted artworks. He was found unconscious outside his home in 2011, police concluding there were no suspicious circumstances. He died last week after three years in a coma.

Andrew McAtee Graduated from Central St Martin’s in 1995, featured in shows in New York and Europe and made adverts for Benson & Hedges and Nike. Runs workshops for teenagers with challenging behaviour.

Stik Makes simple, quirky figures based on people people from east London, and now New York, after spending 18 months homeless. Expresses much emotion with a few lines and colours.

Pure Evil Claiming to be descended from Thomas More and no fewer than eight saints, he is a gallerist too and works in London. Started out painting “weird fanged bunny rabbits”. Now noted for Warholesque crying portraits.