Museums Embrace Works Made of Sound… 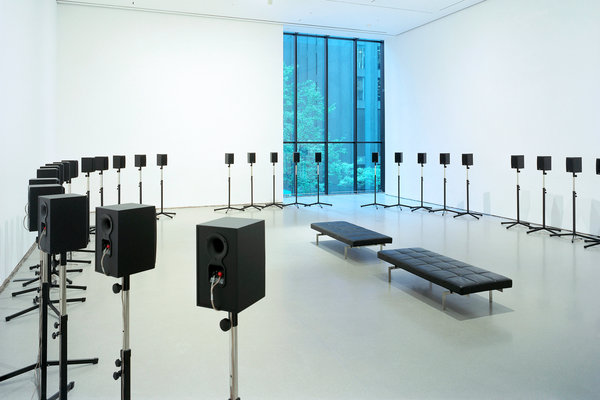 “Forty-Part Motet,” a sound installation by Janet Cardiff, in 2005. 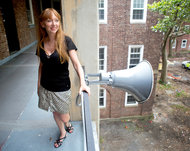 Susan Philipsz with her work at Governors Island.

Note the sound of your computer’s fan amid distant sirens. Hear your spouse in the next room, playing the Bowie channel on Spotify while chatting on the phone with your mother-in-law. Farther off, a TV is tuned to the news and a stereo plays Bach, while a mouse skitters inside a wall.

And know that every one of those sounds can now be the subject of art, just as every vision we see and imagine, from fruit in a bowl to the color of light to melting clocks, has been grist for painting and sculpture and photos. Sound art has been on the rise for a decade or two, but it may have at last hit the mainstream: On Saturday, the Museum of Modern Art is opening its first full sonic survey, “Soundings: A Contemporary Score,” while two major sound installations are to go up in New York in the fall.

“The art of sound questions how and what we hear, and what we make of it,” the curator Barbara London writes in her catalog essay to the Modern show — which means the movement has purchase on a lot that matters. Perched in an office high above MoMA’s garden, where her exhibition will insert stealthy recordings of bells, Ms. London explained that artists are more than ever drawn to sound art, maybe because it sits on the exciting double cusp, as she said, of both music and gallery art. Her new show (or should we call it a “hear”?) reflects the “apogee,” as she put it, that sound art has now reached.

Ms. London’s survey will include those recorded bells, by the American soundster Stephen Vitiello, as well as recordings made near Chernobyl by Jacob Kirkegaard, a Dane, and a grid of 1,500 small speakers, each playing a different tone, by the young New Yorker Tristan Perich. It will also feature the Glasgow-born Susan Philipsz, whom the larger art world has taken to heart.

At the Modern, Ms. Philipsz will be reprising a 2012 work from Germany’s Documenta, the twice-a-decade festival that is one of the world’s most prestigious artistic events. Her “Study for Strings” riffs on an orchestral piece composed in 1943 at the Theresienstadt concentration camp for musicians there. For her recording, Ms. Philipsz has redcted the parts for all the instruments except one cello and one viola, leaving plangent silences between those two players’ scattered notes — and, of course, evoking the erasure of musicians and artists by the Nazis.

“For the public, sound art it still a fairly new and also a very, very accessible medium,” said Tom Eccles, the curator of a new Philipsz commission this fall in New York. “On a very basic, basic level,” he added, “sound is one of our first experiences — in the uterus, in fact.”

Ms. Philipsz’s new piece, called “Day Is Done,” will be the first permanent work of contemporary art on Governors Island, a former military site just south of Manhattan whose public spaces are being revamped with a budget so far of $75 million. Ms. Philipsz is mounting four old-fashioned “trumpet” speakers — the kind you’d see in an old ballpark — across the facade of a sprawling old barracks, and for an hour every evening, they will broadcast the notes of the bugle call “Taps.” The tones of the ghostly melody will pass from speaker to speaker, fanning out across the island’s open spaces.

At a test run one cold day in the spring, the piece evoked the era when “Taps” would have been played daily on the island, while it also triggered thoughts of military funerals and loss of life. (On Sept 11, those on the island were able to see the collapse of the twin towers.)

“Day Is Done” also evokes New York’s maritime presence. Visiting from her home in Berlin for the test run, Ms. Philipsz said that after the recording had played on site for the first time, “we thought it was still on.” She added: “But it was the sound of a ship’s horn. We were so happy.”

Mr. Eccles pointed out that with a piece like “Day Is Done,” “you don’t have to recognize it as art, immediately” — meaning that any knee-jerk resistance to contemporary art is less likely to kick in. “A sound work allows you to do something quite complex that might be unacceptable in another medium,” he said.

That could be because of the role MP3s and podcasts now play in our lives and because of our new comfort with the immaterial world of pure data, which makes immaterial sound art seem less esoteric. Sound waves floating through air may not seem any more exotic than information flowing through cyberspace.

There’s yet another ambitious sound piece about to open in New York. On Sept. 10, the Metropolitan Museum will present “Forty Part Motet,” an installation by the Canadian Janet Cardiff that may be one of the best works, in any medium, of the last decades and the first work in sound at the Metropolitan. A piece like Ms. Cardiff’s “opens people’s eyes to a different art form that they wouldn’t expect to see at the Met,” said Anne Strauss, the project’s curator. “It’s something we can provide more easily, than, say, performance art.”

A photo from Hong-Kai Wang’s “Music While We Work, in the MoMA survey.

We were meeting far uptown in Manhattan, in a 12th-century chapel at the heart of the Met’s Cloisters branch, now celebrating its 75th year as a home for medieval art. The 40 speakers of Cardiff’s piece will be installed in a ring in that chapel, each one transmitting the sound of a single musical part from the choral extravaganza “Spem in Alium,” composed around 1570 by Thomas Tallis. Ms. Cardiff’s piece manages to take one of the most imposing masterpieces of Western music and reduce it to modest human elements. As you sidle up to any one speaker, the single voice you hear seems frail and at sea, and that stands in touching contrast to the grand effect that comes when you stand in the work’s center and hear all 40 parts combined. Wherever “Forty Part Motet” gets installed, a visitor or two often leaves in tears.

The market has noticed sound art’s achievements. “I kind of resigned myself that I would never make any money,” Ms. Philipsz said. In fact, she’s now doing fine. She sold all three copies of her first installation at Tanya Bonakdar, the New York gallery that took her on in 2007. According to the gallery director, Ethan Sklar, her piece in the show at the Modern, also in an edition of three, is priced at almost $150,000. Mr. Sklar spoke of the appeal of Ms. Philipsz’s art to “collectors and institutions who are looking for the strongest and most challenging work.”

It also doesn’t hurt, he pointed out, that there are fewer headaches in storing and shipping a Philipsz data disc than some massive sculptural piece, although her sound fills space just as impressively: “You can have an epic work that comes down to a box.”

But it is still early days in the marketing of sound art. Both the auction houses Sotheby’s and Christie’s say that they have not sold a single sonic work, whereas they’ve begun to get good prices for major videos. Sound art’s vaguely unworldly air may actually increase its appeal.

“It’s not really commodified at this moment, which makes it approachable,” Ms. London said. “All of these works have a poetry, and a fleetingness.”

The mainstream’s embrace of sound art may mask something peculiar: that even as the field reaches new heights, it’s also in crisis. Art-trained figures like Ms. Philipsz and Ms. Cardiff, who build work around the sounds that we care most about — and who resist the whole idea of a coherent genre called “sound art” — are up against a sonic old guard, sometimes including younger figures, that one artist has referred to as the “honk-tweet” school.

Aligned with experimental music rather than visual art, the honk-tweeters are interested in strange beeps and buzzings for their own sakes. They craft what the sound artist, theorist and blogger Seth Kim-Cohen refers to as purely cochlear, rather than fully mindful, sound art.

In June, Mr. Kim-Cohen chided the survey at the Modern for including such work, which he described as the sonic equivalent of Op Art, a movement in painting “that does not demand (or merit) serious critical response,” as he has written. “Surely,” he blogged, “if the (visual) art world is now willing to embrace sound, it should do so according to the same criteria of quality and engagement that it demands of other media.”

Caleb Kelly, a scholar who recently published a book called “Sound,” compiling a range of essays on the art form, said he believes that pieces like Ms. Cardiff’s “Motet,” or the riffs on Hollywood soundtracks by the Swiss art star Christian Marclay, will still matter in a century, whereas today’s honk-tweeters (“dial twiddlers,” Ms. Philipsz calls them) will likely disappear, if they keep doing retreads of John Cage’s postwar innovations.

Sound artists like to point out that while you can close your eyes to an image you hate, you can’t close your ears to a noise. That gives them power but also puts them at risk. If a honk or a tweet does no more than annoy, visitors will vote with their feet.